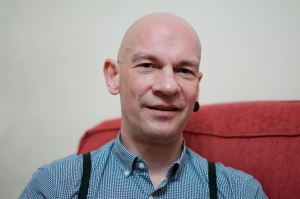 Clive has been ordained since 1996 and has also worked as a personnel officer, lived as part of a religious community, been an auditor, and studied at drama school. Before moving to Wimbledon in 2011, he was Vicar of Cumnor in Oxfordshire, Chaplain to the current Bishop of Liverpool and Curate of Beverley Minster (Yorkshire). His pride and joy is his motorbike, and his favourite word is ‘grace’.

Clive is committed to making the Christian faith as relevant to people’s daily lives as possible, and to building a church where everyone feels genuinely welcome.

An ever-ready rock for parishioners and others in need of spiritual support, Paula has delivered pastoral ministry at St Mark’s since 2008. Formally licensed by the Bishop as a SPA in 2011, early morning jogger Paula is known for running – not the extra mile, but the extra marathon on behalf of distressed and lonely supplicants. Her impromptu trip to Cornwall to fetch a neighbour who had fallen ill while on holiday is etched in the memory, amid leading worship, innumerable home Communions, supporting the bereaved, hospital visits, Bible classes and the ever popular, super-companionable Lunch Bunch. Prayer and spirituality are important parts of her work in helping people to realise that Christ is besides them in the midst of the difficulties and joys of life. After studying law, Paula completed a degree in pastoral theology at Heythrop College, University of London.

St Mark’s is one of four churches that form the Wimbledon Team Ministry.  Most of the business of St Mark’s is governed by the Church Committee, whose members are:

There are no upcoming events at this time.

Any cookies that may not be particularly necessary for the website to function and is used specifically to collect user personal data via analytics, ads, other embedded contents are termed as non-necessary cookies. It is mandatory to procure user consent prior to running these cookies on your website.